The Times today argues that  as the VAT rise is not being added to food and children’s clothing, it is “likely to hit middle-class and higher income groups much more than poorer groups.” But when you look more closely at the statistics it is hard to see how this evidence is supported.

Let’s start by taking the figures at absolute face value. The Deloitte figures the paper uses show that those families earning a combined income of £70,000 will pay £561 more in tax a year, while those on a household income of £25,000 pay an extra £150. So these initial figures suggest that the rich are hardest hit by the tax rise. 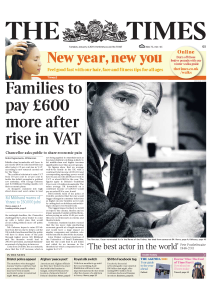 Lets, for now, assume that all the money families have is spent on expenditure and that all families spend that in the same way (I will break it down later). Therefore, as a proportion of their income, those households on £70,000 lose 0.801 percent of their income while those on 25,000 lose 0.6%. While the difference in the figures is less stark than those above, the paper is still legitimate in claiming the tax hike hits the rich harder.

But delve a little deeper into actual spending habits and the figures become much less clear cut. According to the latest Office for National Statistics report on national spending poorer households spend much more of their income on essentials needed for survival and which are subject to the VAT hike.

So nearly 25% of the expenditure of poorer households is directly affected by the VAT rise, while less than 10% of the richest households’ will be. But the rich spend more on transport and leisure activities, in other words luxuries.

Where the paper’s argument lies, therefore, is in not drawing a distinction between essentials such as housing, fuel and power and spending on leisure activities such as recreation and culture.

If you were to draw this distinction then the argument that the middle and upper class are hit hardest by the VAT rise does not stand up to scrutiny.