The Independent scoops the rest of the pack tonight (not often you can say that) with Robert Fisk securing the first full-length interview with the man most likely to take over from Mubarak in Egypt, Mohammed ElBaradei. The only other paper maybe worth a look in is the Telegraph which uses Wikileaks docs to reveal that ministers advised the Libyans on how to get the alleged Lockerbie bomber out of jail. 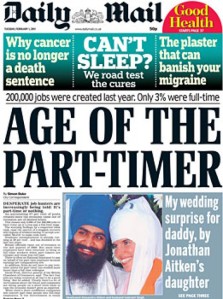 The Daily Mail – “Age of the part-timer”

The National Institute of Economic and Social Research has done some analysis into the 200,000 new jobs created in the past 2 years in the UK and concluded that only 6,000 of these have been full time. While the sources quoted by the paper suggest it is merely a result of the economic downturn, it will be interesting to see whether the longer term trend towards part-time hours continues after the recession. 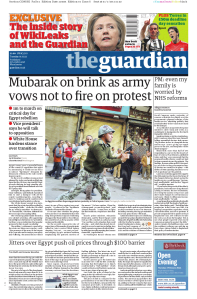 Today may finally be the day that President Mubarak of Egypt leaves his position. Two things have conspired to make this Tuesday the day that will make or break this revolution. Firstly it is the day on which the organisers of the protests swore to put 1 million people on the streets. Secondly the army on Monday swore not to fire on protesters, a clear sign that they had abandoned faith in Mr Mubarak. Even his most hardened supporters must be accepting that time has been called on the old dictator’s leadership. 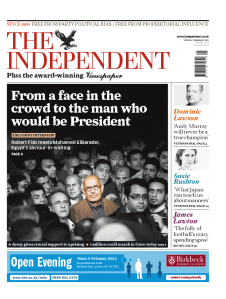 The Independent – “From a face in the crowd to the man who would be President” Yet again Robert Fisk’s exceptional history and reputation have allowed him to scoop the world and get Fleet Street’s first full-length interview with Mohammed ElBaradei since he returned to Egypt. 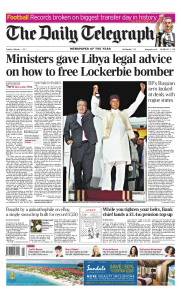 The Wikileaks information has been out of the news for a number of weeks but it returns tonight with the revelation that ministers advised the Libyans on how to get the Lockerbie bomber out of jail.

If you only read one: Can only be the Independent tonight.