A bizarre feeling of deja vu every night at the moment. Again the Times, Indy and Guardian try to tell the story of Libya without having a correspondent there while the Telegraph makes a point of ignoring the story. 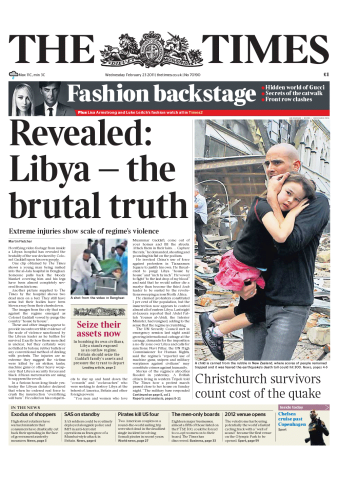 The Times focuses on the images of violence it has received. It talks about videos and pictures it has received of men blown to pieces but chooses not to use them. To me the headline needs a bit of work. The use of revealed and brutal in the same line makes it seem like it is overstating its case a bit.

The Guardian – “‘I’ll die a martyr’ Gaddafi urges a showdown”

The Guardian focuses on Gaddafi’s speech in which he simultaneously denounced his enemies as Western spies and Al Qaeda sympathisers. It reads: “In an angry, ranting and often incoherent speech, the beleaguered Libyan leader ignored evidence of repression and bloodshed, including new reports of death squads, to insist that he would die in his homeland rather than ﬂee abroad.”

The Independent – “I am not going to leave”

The Indy also focuses on Gaddafi’s defiant stance. Interesting that it was not written by Robert Fisk or Donald McIntyre but two staff based in London. I guess it is getting a bit ridiculous having correspondents in Bahrain penning copy about a country in a different continent.

More than 50,000 people are to lose their jobs in the NHS, the paper reveals. I bet sometimes that David Cameron thanks his lucky stars for the contagion in the Middle East as it is keeping him well away from the news.

One response to “Front pages reviewed at midnight: Wednesday 23 February 2011”